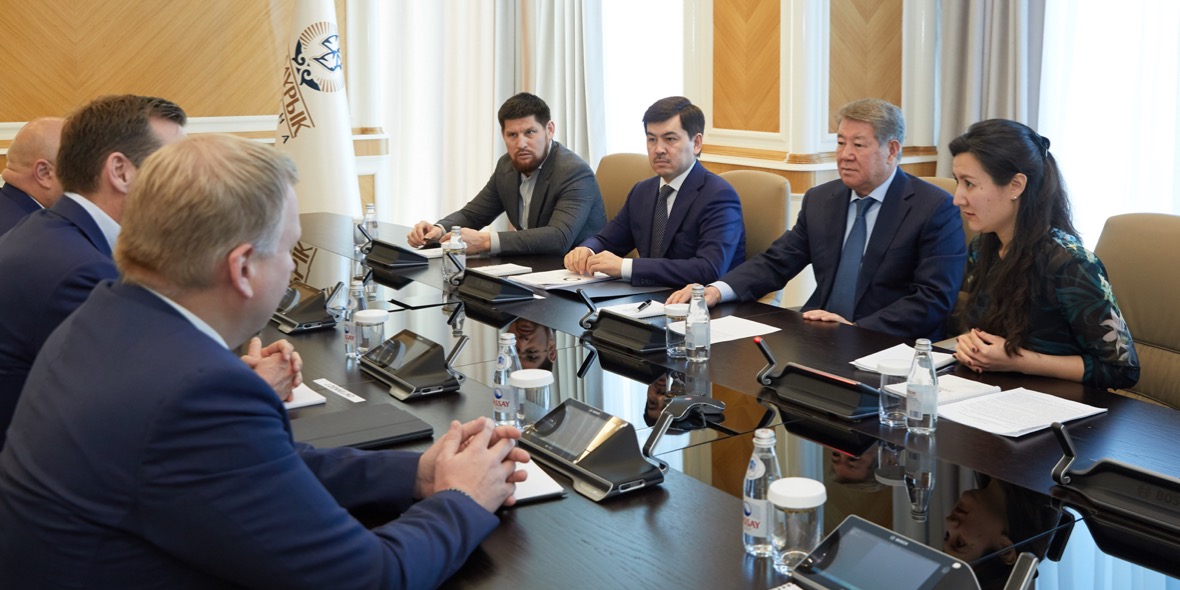 Akhmetzhan Yessimov, the СЕО of Samruk-Kazyna JSC, has held a meeting with the representatives of telecommunication companies Telia Company and Fintur Holdings BV, and discussed the details of the deal, as well as the development of the telecommunications industry in Kazakhstan. The CEO of the Fund pointed out the importance of the contract for the development of the industry itself, as well as in connection with Kazakhtelecom`s possible IPO in 2019.

The representatives of Telia Company and Fintur Holdings BV, Johan Dennelind and Emil Nilssen thanked the CEO of Samruk-Kazyna JSC for the prompt decision-making and support in conducting the agreement.

Today Kazakhtelecom JSC, Telia Company and Fintur Holdings BV have signed a contract on the acquisition of 75% shares in Kazakhstan’s telecommunications operator Kcell JSC by Kazakhtelecom JSC at the Samruk-Kazyna JSC Press Center.

Within the deal, Kazakhtelecom JSC purchases 24% shares of Kcell JSC from Telia Company and 51% shares from Fintur Holdings BV (a joint venture of telecommunications companies, Telia Company (58.55%) and Turkcell (41.45%) respectively).

As stated by Kuanyshbek Yessekeyev, the CEO of Kazakhtelecom JSC, during the process of preparing for the bargain, Kazakhtelecom conducted an in-depth investment analysis, evaluation and comprehensive verification of the results of Kcells financial and economic activities in accordance with international standards for such deals. The decision to acquire 75% of Kcell shares was made by the Board of Directors of Kazakhtelecom JSC and the Investment and Strategic Committee of ‘Samruk-Kazyna’ JSC.

It is expected that the acquisition of a controlling stake in Kcell will have a positive impact on the market value of ‘Kazakhtelecom’ JSC, as well as serve to further development of the telecommunication industry in Kazakhstan as a whole.

As noted by Johan Dennelind, the representative and executive director of Telia company, this contract is a one more important step for Telia to exit from Eurasian market and concentrating on North and Baltic sea regions within the company`s strategy. This is the sixth deal in the region since 2015.

As K. Yessekeyev stated in his speech, “For ‘Kcell’ and ‘Activ’ subscribers, I just want to say: there will be no increase in rates, or a drop in the communication quality and that is exactly what the opponents of this deal have been frightening people in social networks. Firstly, there are no prerequisites for this, all aspects of the purchase have been calculated by us, and secondly, on the eve of the IPO, Kazakhtelecom itself is not interested in such things.”

In January 2018 the Committee on the Regulation of Natural Monopolies, Protection of Competition and Consumer Rights of Kazakhstan accepted Kazakhtelecom’s application for the purchase of 75% shares of Kcell telecommunication operator. After reviewing the application, the antimonopoly authority issued a decision regarding this transaction (https://goo.gl/7ePMVC). At the same time, a number of requirements were established, including: the maintenance of existing rate plans (packages) for three years after the completion of the deal; the emergence of additional services for subscribers; expansion of 4G coverage in rural areas (with a population of 4 thousand people and more) until 2021; the introduction of 5G standard services no later than December 31, 2021. At the same time, the antimonopoly authority obliged Kazakhtelecom to preserve the Kcell and Activ brands. In addition, in order to preserve the proper quality of services and cost, it is settled to maintain the existing agreements on the joint development of infrastructure with other participants of the cellular communication market.