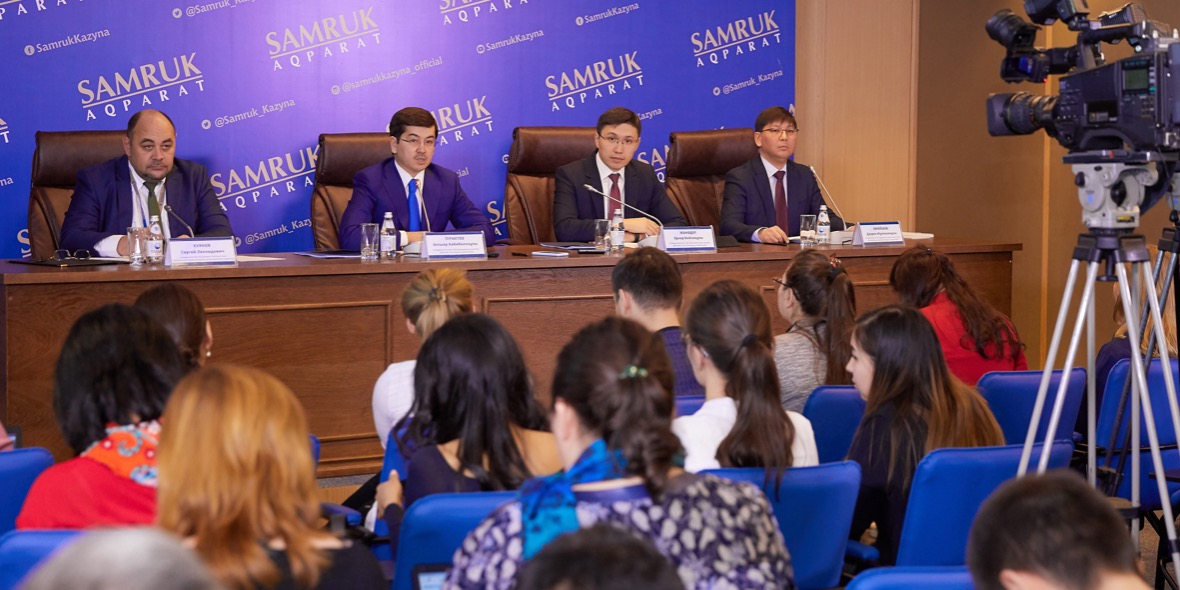 Samruk-Kazyna JSC held a meeting with participation of Heads of major portfolio companies based on the performance results for 2018.

“First of all I would like to note the growth of key financial indicators for the last year. Thus, the operating income has increased to the last year level by 31% and amounted to more than KZT8.3 trillion. The net income has increased by 37% or to KZT821 billion, the operating profit exceeded more than KZT1 trillion. The Fund’s profitability has grown to 30%”, - Akhmetzhan Yessimov, CEO of Sovereign Welfare Fund “Samruk-Kazyna” JSC, said while opening the meeting.

31 assets making over KZT230 billion were sold under the Comprehensive Privatization Program. One of the most significant events of the last year was the transfer of Kazatomprom shares to the international IPO which raised USD451 million fully transferred to the National Fund.

Two portfolio companies of the Fund, Kazakhtelecom and Air Astana, are also scheduled to the IPO in 2019.

A large amount of work was performed to ensure the financial stability of subsidiaries which made it possible to reduce the debt of the Group of the Fund by KZT1 trillion. In turn, the external debt has decreased by USD3.2 billion.  The overdue receivables have reduced by 80%, from KZT331 billion to KZT66 billion.

A new technologies program was reviewed which economic effect has made KZT42 billion.

In 2018, JSC NC KazMunayGas has redeemed Eurobonds for USD1.6 billion and successfully completed the transaction for managing obligations for KZT3.2 billion. Samruk-Energy JSC has significantly improved its performance including reduction in the Company’s debts by KZT50 billion. These measures removed the company from the red zone of financial risk.

The acquisition of 75% stake in Kcell has increased the value of Kazakhtelecom shares by 10-15% after the public announcement of the deal. Update completion of all three oil refineries satisfied the needs of the domestic market in high-quality oil products of K-4, K-5 standard.

“Positive results of the last year laid a good groundwork for solving other urgent issues of a new year. And the tasks this year are more complicated. In order to implement a new strategy of the Fund until 2028, our joint efforts will be focused on solution of key tasks aimed at improvement of production performance, strengthening the financial sustainability of companies, as well as implementation of Privatization, Transformation and Digitalization Programs. And we are responsible for the high-quality execution of the instructions set by the Head of State to the Fund”, - Akhmetzhan Yessimov summarized.

Alisher Pirmetov, Managing Director for Operations of the Fund, has presented new approaches to the Fund’s Development Strategy and improvement of the procurement system at the briefing after the meeting.

“According to the new Strategy of the Fund until 2028, the Fund will focus on reinvesting funds from privatization proceeds and building an effective investment portfolio both within the country and abroad till 2024. In the long term, up to 2028, Samruk-Kazyna JSC will focus on full transition of the Fund to the model of active and effective management of diversified investments portfolio,” - A. Pirmetov said.

He also indicated positive results of the comprehensive work on improving the procurement system which saved more than KZT121 billion and supported the establishment of unique production in Kazakhstan, with creation of new jobs. In addition, as part of implementation of the instructions of the Head of State to support small and medium-sized businesses, intra-group procurement was reduced by more than 10 times. It enabled not only to transfer procurement for more than KZT309 billion to the competitive environment but also to provide the opportunity with 8 thousand business entities to participate in the procurement of the Fund’s Group. The Fund’s Companies have saved more than KZT22 billion.

A unique “off take contracts” mechanism was introduced in 2018 to support the processing sectors of the economy, which guarantees a long-term order for domestic enterprises which develop new unique production in the Republic of Kazakhstan. The first off take contracts for KZT4 billion were concluded. The implementation of these initiatives will stimulate business investment in creating new industries, increasing the number of jobs and tax revenues to the budget.