Samruk-Kazyna JSC (“the Fund”) has conducted an Investor Day in Almaty, in which the Fund's top managers updated potential partners and investors on the current status of the privatisation programme and presented some of the Fund's companies.

“Samruk-Kazyna is delighted to be playing a crucial role in the privatisation programme initiated by the Government of Kazakhstan. We strongly believe in the importance of developing the local capital markets and hope that Kazakhstani investors will take an active part in this landmark process. With this in mind and in accordance with best international practice, we plan to offer two thirds of privatised assets to local investors and joint ventures, and one third to foreign investors. Today, the top managers of the Fund and portfolio companies are giving presentations to the local investor community on the large and medium-sized companies planned for privatisation. These assets are unique in their fields and are well-prepared for the privatisation process.”

Berik Beisengaliyev, Managing Director for Asset Optimisation of Samruk-Kazyna, noted in his speech:

“Our privatisation programme is governed by unified principles. We intend to retain controlling stakes in our natural resources assets, with no more than 25% for sale in these companies. However, the Fund may consider selling a controlling stake in companies outside of this sector. We also want to ensure the representation of minority shareholders in the Board of Directors, and that the stakes sold have sufficient liquidity for trading on stock exchanges. We are preparing assets for privatisation both by improving companies' operational and financial efficiency, and through more routine pre-sale preparation. We adhere to strict corporate governance standards, which are firmly established by the management and majority shareholders. It is vital that companies are overseen by an independent Board of Directors and are managed with a transparent decision-making process with strict  accountability to the Board. We are focused on ensuring the professionalism of companies' senior management and select candidates for senior executive positions from among the most qualified market-oriented specialists with experience in the relevant industries.”

NC Aktau International Sea Trade Port JSC, the only Kazakhstan seaport providing international transportation of dry cargoes, crude oil and petroleum products, with an annual turnover of 15 million tons; Kazmortransflot, the largest sea transport operator in Kazakhstan, carrying oil and oil products, general cargo and containers to the Caspian ports of Russia, Azerbaijan and Turkmenistan, as well as more distant destinations; Astana Solar, a group of companies producing photovoltaic modules with a total capacity of 60 MW per year; and Euro-Asia Air, the largest helicopter airline in Kazakhstan, which helps to service the country's oil and gas industry.

Dauren Tasmagambetov, Director of the Department of Asset Privatisation and Restructuring, Samruk-Kazyna, remarked:

"All these assets will be offered to investors through an open two-stage bidding process. Our companies are open to negotiations." 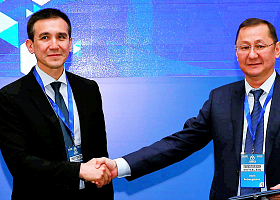