01.11.2019
Press releases
Akhmetzhan Yessimov and Bakytzhan Sagintayev to sign a memorandum of cooperation
In Almaty, a meeting was held on development of the city between Akhmetzhan Yessimov, CEO of Samruk-Kazyna JSC and Bakytzhan Sagintayev, akim of the southern capital. Samruk-Kazyna JSC and the akimat (Major’s office) of the southern capital signed a Memorandum regarding Cooperation in...

23.10.2019
Press releases
Akhmetzhan Yesimov to voice where Samruk-Kazyna will invest in the coming years
The third meeting of the Kazakh-British Business Council (KBBC) was held in London, organized by JSC SWF Samruk-Kazyna in conjunction with JSC NK Kazakh Invest and the international business newspaper Financial Times. The CEO of the Fund Akhmetzhan Yessimov attended the event, along with... 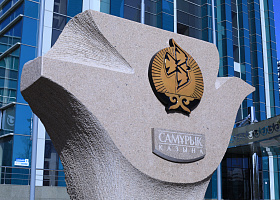 25.07.2019
Samruk-Kazyna Fund
Samruk-Kazyna net income increase for q1 2019
The net income of Samruk-Kazyna SWF has increased by KZT128 billion or 78% following Q1 2019 as compared to year earlier. According to the consolidated financial statements, the net income per stockholder’s equity for Q1 of the current year has amounted to KZT291 billion. At the same...

05.05.2019
Press releases
Samruk-Kazyna to fund the cycle track
The cycle track was held today at the Central Park of Culture and Rest. M. Gorky. The opening ceremony was attended by Akhmetzhan Yessimov, CEO of Samruk-Kazyna JSC and Bauyrzhan Baybek, mayor of Almaty city. During the meeting, the head of Fund had read with the sports ground and...

25.04.2019
Press releases
Samruk-Kazyna to sign a number of agreements with investors
Within the framework of the international cooperation forum ‘One Belt - One Road’, Samruk - Kazyna JSC has held a round table in Beijing on the issues of privatization and investment opportunities of the Fund. The Chinese business community met this event with great interest. This event...